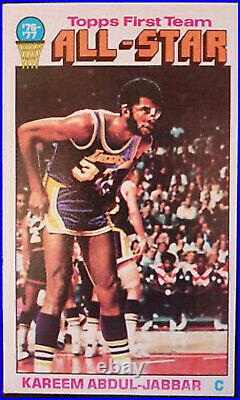 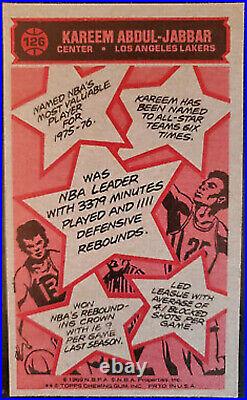 However, instead of using the same size they used to make the tall boys of 1969-'70 and 1970-'71, they made these cards even larger. They measured 3 1/8 inches by 5 ¼ inches, larger than any regular Topps card in any sport. The larger size was appealing to collectors and popular with autograph seekers as well.

The cards featured player photos that were seemingly larger than life, with very little distraction. A team name was spelled out vertically to the left, along with graphic circles that gave the illusion of a basketball dropping into a hoop.

The player's name and position were given in the white border below the photo. The giant-size backs were broken down into blocks. The first one contained a card number, name, team, position and vital statistics.

In a first for Topps, the player's college statistics are included in the second box. A short write-up follows that, and then the professional year-by year stats. Finally, a box at the bottom explains a basketball term with a cartoon. Since the ABA had dissolved before the season, there were fewer teams.

As a result, Topps printed up fewer cards in its complete basketball set. There were 144 cards in all, and the set was evenly distributed over two printing sheets. The checklist card is hard to find in top condition, while card #1 of Julius Erving is hard to find centered.

After increasing numbers of subsets with the past several years, there was only one in this set: the All-Stars (cards #126-135). Some of the All-Stars had regular base cards, while others didn't. Kareem Abdul Jabbar had a base card (#100).

All-Star banner is added to the top border of the cards in the subset, with the team info removed from the left side. This item is in the category "Sports Mem, Cards & Fan Shop\Sports Trading Cards\Trading Card Singles". The seller is "rem-fc" and is located in this country: US. This item can be shipped to United States.